Is Joe Mixon Worth the Squeeze?

When the NFL Scouting Combine gets underway later this week in Indianapolis, one potential future star of the league will not be in attendance. It is not that his tape was underwhelming, or he went to a small school or his numbers were not eye-popping; He is an extraordinary athlete with smooth hips, soft hands and world-class burst and he went to The University of Oklahoma. All he did there was account for 27 TD in 25 games played and accumulated nearly nearly 3,000 all-purpose yards in just two seasons. He also split time with another running back, so he was not the only running back on Oklahoma’s roster getting snaps and carries.  For 99.9% of football student-athletes that would be more than enough for the invite. Not for this athlete, though. Talented as he is, the reason he will not be in attendance in Indianapolis at the “T-shirt Olympics”, a term the media dubbed this event, is because he knocked a woman unconscious at a Norman, Oklahoma bar early one morning shortly after he arrived on campus for summer workout as a college freshman in July.

Naturally, Joe Mixon is the athlete described above and what a divisive one he is at that. Bar none he is this NFL Draft’s most polarizing prospects and, frankly, one of the most polarizing athletes of the last 15 years. He was polarizing before the video of his assault on Amelia Molitor was widely released to the public in December of 2016. University of Oklahoma’s head football coach Bob Stoops allowed him a second chance to stay on the team after his arrest. This was a divisive decision. Would Mixon have been allowed to stay on the team if he was a junior reserve and not a prized 5-star running back and one of Stoops’ best recruits since Adrian Peterson chose the Sooners over the Longhorns? Only Stoops knows and he will never tell.

What is known is that Mixon made a mistake and was not allowed to play his freshman year of college and now that mistake has kept him out of Scouting Combine, potentially costing him millions of dollars. Some knowledgeable NFL executives say Mixon probably would have been a First-Round pick if not for what he did. He has always claimed it was a mistake. Words were exchanged and he lost his temper. If that is indeed the case, then how come it took him two years to apologize? Two years. Two years is a lifetime to say sorry to a woman he knocked out cold causing physical damage that took her months to recover from and emotional damage that might take her years to recover from, if she ever does. It is unfortunate that these athletes and entertainers are in the public eye. As soon as they get done with getting a free education, the good ones make millions of dollars.

There is no denying his talent. Not everyone who lives in Oklahoma is an Oklahoma football fan but, living in the state of Oklahoma and having family and friends that follow football closely I think it is safe to say we are all somewhat exposed to football in Oklahoma, whether that be Oklahoma State or Oklahoma. I have seen Mixon make plays that tell me this could be the second best NFL running back Stoops has produced at Oklahoma, behind only Adrian Peterson who is one the best running backs of his generation and has all but reserved his spot in Canton, OH, where they house the Pro Football Hall of Fame. Mixon has some of the best hands I have seen from a college running back, on par with fellow 2017 Draft prospect Christian McCaffery. He has major talent and elite upside. But I cannot shake this feeling deep in the pit of my stomach. 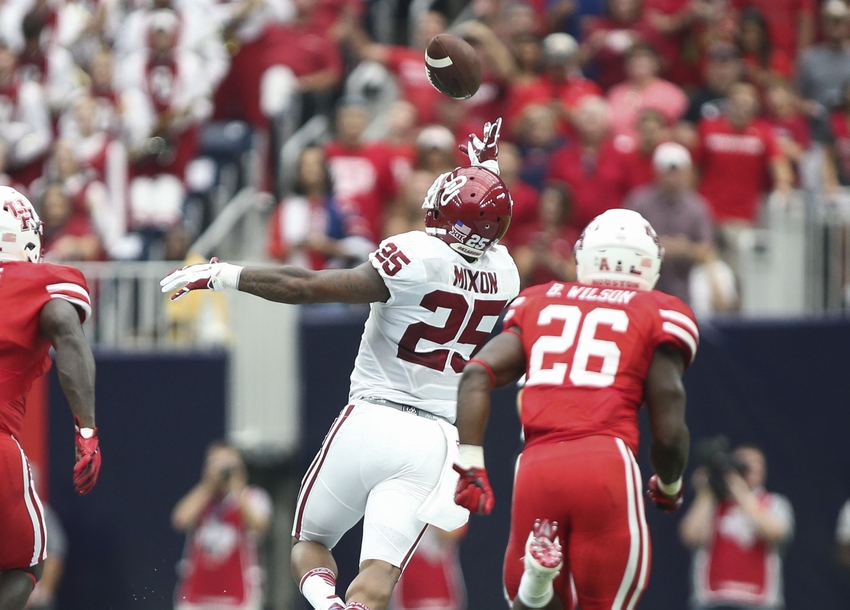 Thus, I ask you; When Mixon hears his name called in May, do you hope your team is the one doing the calling? Here is this world-class athlete at the running back position that can play all three downs and be a true game-changer. The flip side is he is a scumbag. Apart from the assault, he also had a meltdown on a parking attendant causing Bob Stoops to suspend him for nationally televised game in the fall of 2016 vs Iowa State. He has baggage. But he can play! The media and the NFL have screamed from the mountaintops that they want reform! They will not stand for this anymore! Well, here is the best test case they could ask for, albeit at the price of the innocent victim in all this. In May, when his name is called, I hope and pray it my team will not be the one selecting him. Talk is cheap. Sending the right message to all athletes, from high school to the professional level, that this type of behavior will not be tolerated should be of paramount importance and far superior than winning a few more football games. I firmly believe in second chances; it is just tough for me to wrap my head around giving a second chance to someone who took two years to apologize for something men have been told all our lives is wrong.

Robo is our John Clayton minus the ponytail. Truly a numbers guy who will discuss the X’s & O’s with literally anyone. He is from Oklahoma despite his fake southern accent. Follow Robo on Twitter @morobert425 See more of Matthew Robertson's posts

College Football Week 2: Picks Against The Spread For Top-25 Teams

Level Headed Ep #16: Is A McDonalds Snack Wrap A Taco?

Is Joe Mixon Worth the Squeeze?