Oklahoma Football May Have Finally Stooped Too Low

As we get closer to the Red River Rivalry featuring the University of Oklahoma Sooners from the north and the University of Texas Longhorns from the south, something legendary happened in the game’s final minutes in October 2001 that forever altered The Oklahoma Football Program and the game itself. The University of Oklahoma has long been lauded for possessing a defense-first mentality coupled with grit and physicality. The Switzer Center, which houses the national championships and Heisman trophies the school have won, is adorned with names such as Lee Roy Selmon, Brian “The Boz” Bosworth, Tony Casillas and Kurt Burris. This was how Oklahoma football was played from Coach Bud Wilkinson through Barry Switzer and all the way to the early years of Bob Stoops.

One name that was not mentioned above was Roy Williams. Williams Is considered by most to be a top five defensive player at the University of Oklahoma of all time. And to this day, he lays claim to the most iconic still-frame photograph of The Red River Rivalry. With Oklahoma barely clinging to a 7-3 lead over Texas and just two minutes and five seconds left on the game clock it was going to come down to this. This was the drive that would decide the winner of the game and yearlong bragging rights to one fan base that vehemently dislikes the other. Roy Williams, Oklahoma’s All-American safety had one job on the play. That job was to affect Texas Quarterback, Chris Simms. The Texas blocker’s job was to make sure Williams didn’t affect the ability of Simms to complete the pass. What transpired next was a scene out of a movie. A Superman movie, to be exact. Williams perfectly timed the snap count and, in one fluid motion, hurdled the Texas blocker and dislodged the ball out of the left hand of Chris Simms and right into the outstretched hands of Oklahoma Linebacker Teddy Lehman for an easy walk-in TD. That Roy Williams play put Oklahoma ahead by 10, with under two minutes remining, all but sealing the win for the Sooners. Final score: Oklahoma 14 Texas 3.

That was a pivotal moment not just in the Red River Rivalry but for the game of football. Sept. 11 was a cataclysmic event that caused all Americans to think about who and what really matters to us. Football is a silly game. Even though many millions of people in this country love it, it still pales in comparison to the lives that were lost that day. However, even for just a small moment in time, everyone that I was with at that watch party will always remember how special that moment was to them. A small glimmer of hope in an otherwise somber month.

In the ever-changing landscape of football, there has been a shift in the dynamic of how the game has been coached and played. the old-fashioned conservative way of football, where coaches were content to run the ball with their running backs, play field position and control the majority of the 60 minute game clock has been replaced with a new philosophy that the best way to win games is to put the ball in the quarterback’s hands, usually thought of as the star of the team, and have him make throws to the different playmakers at his disposal. Teams are having to game plan around stopping uber-athletic quarterbacks and towering wide receivers during RPO plays (run-pass option) and back shoulder fades, where the quarterback throws the ball to his wideout in a spot where only his wideout will catch it or it will be an incomplete pass, but the lowest odds of being a turnover. Those plays that are being schemed up in the early hours of the morning by genius offensive coordinators on the college level tend to leave defensive coordinators scratching their heads come game days. Often, teams cannot adequately defend these plays because they simply don’t have the athletes in place to execute the opponent-specific scheme the defensive coordinator has spent all week implementing. Successful coaches will always tell you “It’s not about the X’s and O’s, it’s about the Jimmies and Joes.” That quote was originally termed for Youth Football. However, In the case of this current version of the Oklahoma Sooners it might really be “about the X’s and O’s.” Oklahoma has the talent level to be good on defense. They have “the Jimmies and Joes” So, there is no other conclusion to be drawn than the defensive scheme and game plan is fundamentally flawed.

Oklahoma has faced three Power-Five teams in their first four games. Those opponents, while all ranked when they faced OU, have averaged 41 points against them. They gave up 410 yards to Houston, 433 yards to Ohio State and 514 yards to TCU including multiple 60+ yard touchdowns. This is Oklahoma. The Big 12 has been a league driven by offense in the last five years so there will be games where each team scores 80 to 100 points combined. The losing team will oftentimes generate meaningless points since they are down by so much and the winning teams’ coaches want to get some younger guys experience while the losing team is still trying to put up points to make the score look respectable. Some of that comes with playing in the Big 12, a conference notorious for high scoring football affairs, but those numbers are eye-popping when you take out the Big 12 component and just consider Oklahoma a College Football contender.

To make matters worse, Oklahoma head coach Bob Stoops announced his brother Mike would resume his role as the program’s defensive coordinator after leading the University of Arizona’s football program to eight mediocre years as the head coach in Tucson. Mike Stoops finished with an overall record of 41-50. Brent Venables was the current defensive coordinator at Oklahoma when Mike Stoops was announced he would be resuming his role. Venables had shared the title of co-defensive coordinators from 1999-2003 with Mike Stoops, until Mike Stoops left to become University of Arizona’s head coach. This time it was Brent Venables turn to leave in 2012. Venables saw the writing on the wall and bolted as he wanted his chance to shine at an up-and-coming program. Venables was getting head coaching interviews and other interviews where he could be the sole coordinator of the defense. Venables landed at Clemson with an unorthodox coach in Dabo Swinney. All Venables has done at Clemson is become one of the highest paid assistant coaches in football and helped lead Clemson to a National Championship Game appearance, beating Oklahoma in the Orange Bowl Semifinal Game.

Oklahoma has the talent to establish some optimism going forward this season, but the scheme is out of sorts. They have played three of the five best offenses they will face this year. Things on defense should start to turn around, probably. But, if the schemes and the weekly game plans keep failing the Stoops’ and Venables keeps proving to the Oklahoma Athletic Department they made the wrong decision to bring back Bob Stoops’ brother, I cannot envision Mike Stoops getting another full season to right the ship in Norman. I know it is hard to fire your brother. Unfortunately, if it is Mike staying, then it just might be Bob walking out the door next. Not exactly what fans had in mind when they set their yearly lofty expectations in Norman, Oklahoma of “Championship or Bust”

One last nugget: Brent Venables and Dabo Swinney have faced Mike and Bob Stoops each of the last two postseasons and the cumulative score is 77-23 in favor of the Clemson Tigers. Yikes indeed, Sooner Nation. 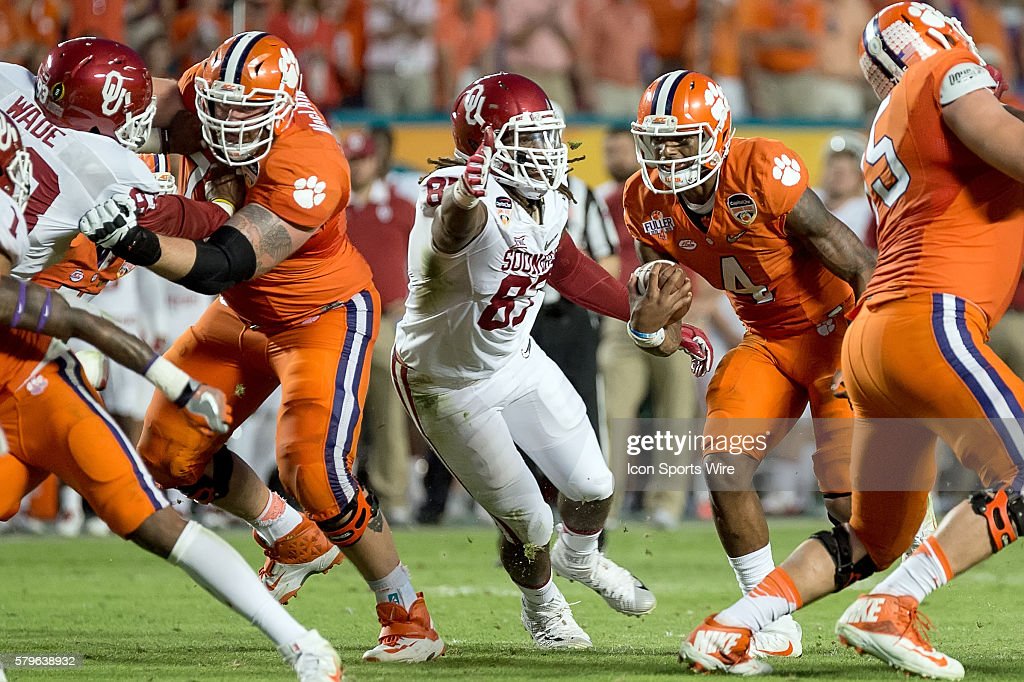 Robo is our John Clayton minus the ponytail. Truly a numbers guy who will discuss the X’s & O’s with literally anyone. He is from Oklahoma despite his fake southern accent. Follow Robo on Twitter @morobert425 See more of Matthew Robertson's posts

RIP Big XII: Why the Conference is Dying a Slow and Painful Death

Gary Kubiak to take the week off with a "Complex Migraine"

The luster is off all three Stoops brothers. Bob has done a great job at OU but it certainly looks like time is drawing near for him to move on and for the storied Sooners to bring in some new energy. Mike should be coaching high school back in Ohio and Mark is going to get blasted this weekend by Alabama. Wildcat fans can’t wait for basketball season.
RVD

Oklahoma Football May Have Finally Stooped Too Low